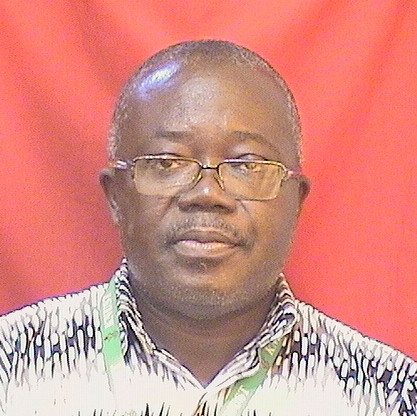 Prof. Boateng's present research interests are in the areas of design, test and diagnosis of logic and VLSI circuits, test of PLL, network security pr...~more

Prof. Kwame Osei Boateng, appointed Director of IDL from 1st August 2018, holds a Doctorate in Systems Engineering from the Graduate School of Engineering and Science of Ehime University, Japan, Masters in Computer Science from the same university and BSc. (Hons.) degree in Electrical/Electronic Engineering from the University of Science and Technology (now Kwame Nkrumah University of Science and Technology), Kumasi Ghana. During the doctorate studies, Prof. Kwame Osei Boateng was engaged, as a research assistant, in the development of computer programs for laboratory experiments.

In the first three years of post-doctoral period, he was involved in R&D activities for the development of computer-aided design and test of very large scale integrated (VLSI) circuits at Fujitsu Laboratories Ltd., Japan, where he worked as a researcher. His duties included the modelling of hardware in the C language and conducting model simulations for the purposes of testing hardware.

Since March 2003, Prof. Boateng has been working for Kwame Nkrumah University of Science and Technology as a senior lecturer,later as an associate Professor and currently as a Professor . For six years (2003-2009), he doubled as an ICT consultant and exercised a technical and administrative supervisory role in the design/expansion and maintenance of the university internetwork and information system software development and deployment. He has been an instructor of Cisco Certified Network Associate Curriculum of the KNUST Cisco Academy since 2006. He was the first head of the Department of Computer Engineering from 2007 to 2009. Again he was the head of Department of Computer Engineering from 2011 to 2016, and from February 2016 to July 2018 he was the dean of Faculty of Electrical and Computer Engineering of the College of Engineering.

Prof. Boateng has since 2004 supervised the undergraduate final-year project work of about two hundred and fifty (250) students, nineteen (19) second degree theses and three (3) PhD theses. Currently he is supervising another three (3) PhD theses. He has mentored two groups of graduates who took projects to Ghana Multimedia Incubator Centre—one of the groups was able to develop its project into a viable security appliance development company.

Prof. Boateng headed the Kumasi Virtual Centre of Information Technology (KVCIT) of the KNUST Institute of Distance Learning (IDL) in the 2010/2011 academic year. He is currently a Lead Facilitator/Course Writer of the Computer Engineering Programme of IDL. He was the Coordinator for the same programme from 2007 to 2010. He was a facilitator for RMIT University/African Virtual University at KNUST from 2004 to 2006.

Prof. Boateng has been of service to KNUST, the nation Ghana and the international community. He has been a key role player in attracting and maintaining support from Texas Instruments Inc. (TI) for a period from 2005 to 2017. Within the period TI has supported the Faculty of Electrical and Computer Engineering in facilitating a semester’s study at Texas A & M University for sixteen final-year students and also sponsoring eighteen of our graduates for their Master Degree programmes of study at the same University. Also, as part of capacity building in VLSI Design, the TI-Cadence Microelectronics Laboratory was established. All these activities, together with annual monetary gifts over the period amounted to the tune of over Two Million US Dollars (US$2,000,000). Also, as the University ICT Consultant, He played a role under the leadership of Professor K. Singh, in attracting one of the 5 Regional Tele-Education Centres of the Pan-African e-Network Project of the AU to KNUST. Equipment procured were installed to establish the e-Learning Centre, which has now become an integral part of IDL. The Centre was funded by the government of India to the tune of about Four Hundred Thousand US Dollars (US$400,000).

Prof. Boateng has served as chairman of over seven (7) accreditation panels and member of five (5) accreditation panels, all of the National Accreditation Board of Ghana. He was a member of a team tasked by the National Accreditation Board to prepare a subject benchmark for tertiary education in Computer Engineering in 2016. He was the organiser and main resource person of a UNESCO-sponsored Workshop on e-Content Development for Science and Engineering subjects in April 2005. Prof. Boateng has been a moderator and external examiner for non-affiliates and affiliated institutions of KNUST. He has been the KNUST Representative on the Academic Board of All Nations University College since 2016. Also he was Chairman of Programme Advisory Committee for HND Electrical and Electronic Engineering of Koforidua Polytechnic for two years (2008 – 2010). Again from 2004 to 2009 he was a member of a Team of Experts who prepared a concept paper on ideas and proposals for the setting up of a Research and Education Network (REN) in Ghana. Further at the end of the Annual InterCED Conference on ICT and Economic Development (March 3 – 4 2004), held in Accra, he was among twelve participants selected to draft the conference declaration, which was focused on how to use ICT as a tool for meeting the developmental needs of Africa.

Prof. Boateng was a member of Local Organising Committee and Tutor, ICTP Microprocessor Laboratory African Regional Course on Advanced VLSI Design Techniques held on July 25 – August 5 2005. He was a tutor at this training workshop; and again he served as an instructor at ICTP-KNUST Microelectronics Workshop on FPGA and VHDL for Research and Training in Africa held in Ghana on November 24 – December 12 2003.